Anaheim Ducks: Spotted! Corey Perry on the Ice at Practice by Ciara Durant
Anaheim Ducks: Ryan Getzlaf Has Had Enough, But Will Change Come Of It? by Chris Bushell

LOS ANGELES, CA – NOVEMBER 6: Cam Fowler #4 of the Anaheim Ducks skates with the puck during the third period of the game against the Los Angeles Kings at STAPLES Center on November 6, 2018, in Los Angeles, California. (Photo by Juan Ocampo/NHLI via Getty Images)

Cam Fowler is set to begin a new 8-year, $52 million contract next season and fans are wondering if he’s really worth it. He’s struggled to meet expectations but is he still one of the Ducks’ best defensemen?

Cam Fowler’s return from injury likely hasn’t gone as he planned. He missed 23 games due to facial fractures he sustained after getting struck in the face by a puck. As always, Fowler has been a minute-muncher for the Anaheim Ducks this season trailing only Hampus Lindholm. In his 19 games before injury, Fowler was averaging 24:41 minutes per game. In the 9 games since his return, he’s averaged 23:24 minutes per game.

Cam Fowler has spent the majority of the season playing alongside Josh Manson. Despite forming a seemingly mutually beneficial partnership with Brandon Montour last season, the coaching staff decided to shake things up after a first-round playoff defeat to the San Jose Sharks. The resulting switch saw Hampus Lindholm move alongside Brandon Montour and Cam Fowler slotted beside Josh Manson. 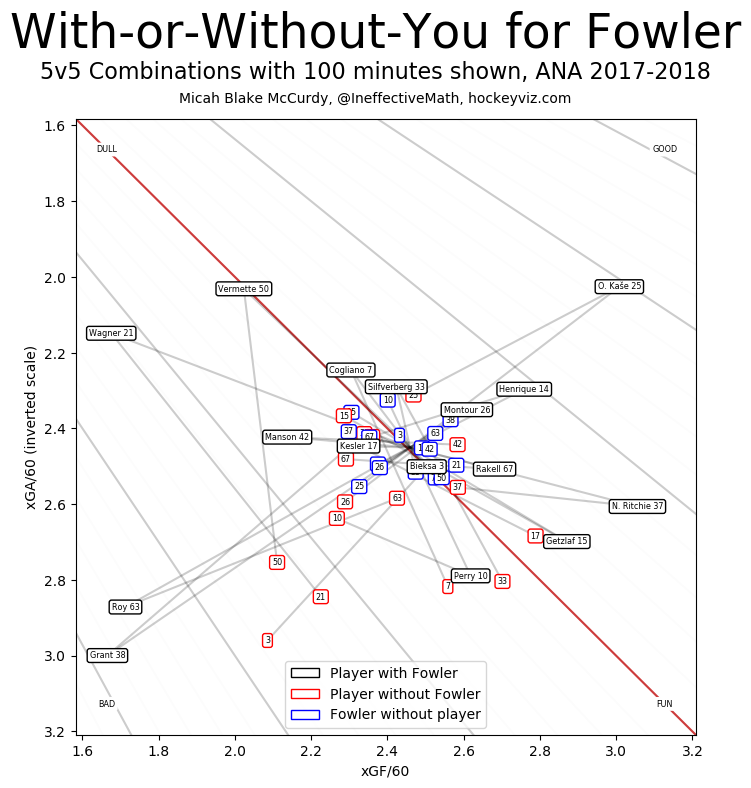 On the surface, Fowler and Montour never seemed like it would work particularly well. Both were freewheeling defenseman which often resulted in their partners having to take the lions share of defensive responsibility. However, it just simply worked.

Finding a partner for Fowler often felt as difficult as finding that top line left-winger for Ryan Getzlaf. Many tried, few were successful. Which wasn’t surprising considering Cam Fowler had spent most of his career with Kevin Bieksa, Francois Beauchemin, and Ben Lovejoy.

Fowler and Montour just seemed to click, but management decided to go in a different direction. A direction that would split up one of the leagues best pairings in Hampus Lindholm and Josh Manson, and shift Cam Fowler to yet another unfamiliar partner.

The brings us to the 2018-19 season. Fowler has never been a possession monster, often finishing the year below break-even in shot attempts. In fact, he’s only finished above break-even twice in his 9-year career. However, this year has been particularly abysmal for Cam. Before the injury, Fowler’s possession rating at 5v5 was 41.2 which was second worst among Ducks regulars. Fowler’s partner, Josh Manson, came in at the bottom with a 40.9 possession rating.

Fowler and Manson have played over 300 five-on-five minutes together and the results haven’t been pretty. Not only has it been obvious on the eye-test that the pairing has struggled, but the underlying data backs it up. They have the worst possession rating of the Ducks high-usage pairings and their expected goal numbers have been just as bad.

In the past, it was easy to blame Fowler’s partners for the pair posting poor shot-share numbers. I mean come on, it was Bieksa and Lovejoy. However, now it’s Josh Manson and it’s not as easy to push the blame. It gets even harder when you look at Josh Manson without Fowler. 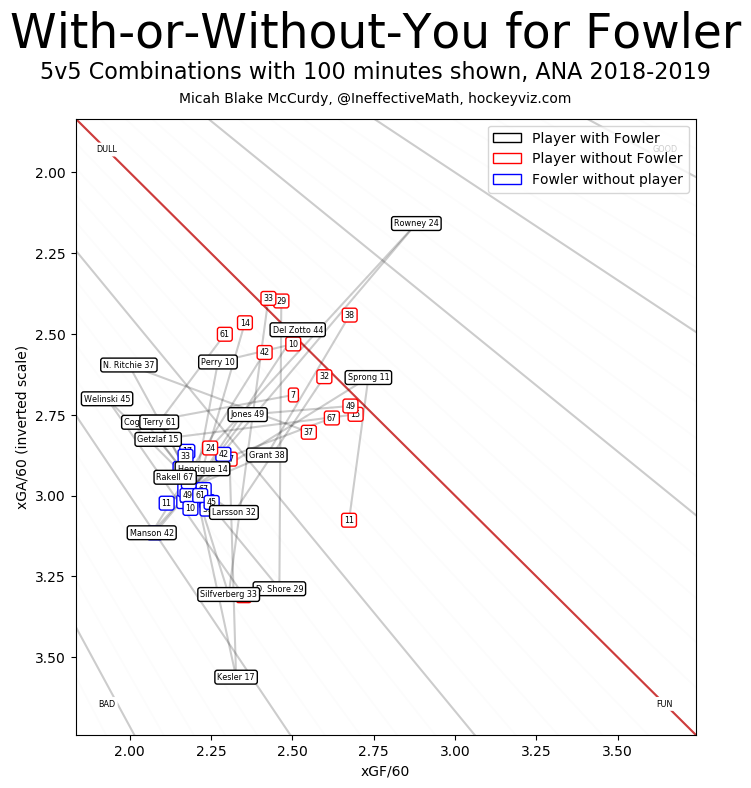 Without Fowler, Manson’s possession rating jumps up over 4.5 points. It’s not a significant increase, but it does suggest that Manson isn’t the one and only reason for the pairings awful numbers. On the other hand, when Fowler is without Manson his possession rating drops to an awful 40.5.

Manson spent the majority of his time away from Cam Fowler with 21 y/o rookie Jacob Larsson. In fact, the pair has played almost exactly the same amount of minutes as Manson and Fowler. With only 4 minutes in difference, the comparison is there to be made. Larsson and Manson turned out to be a surprisingly efficient pairing, posting some of the highest shot-share and expected goal numbers the Ducks have seen all season.

Fowler’s 8-year $52 million contract kicks in next season, and the question becomes; is he really worth it?

Skating has also been the strongest asset that Fowler possesses. He has the ability to skate himself out of difficult situations. According to Sportloqiq, that’s led to him having one of the lowest defensive turnover rates and being one the best at controlled zone exits in the NHL.

He’s been doing it for a long time and it’s no secret he possesses elite skating ability.

The problem is Fowler’s defensive game hasn’t developed to a point where you could call it a strength. There have been several times where he’s been caught puck watching or just simply missed an assignment.

And then there are plays like this that just make you wonder what’s going through his head. Where are you going, Cam? Where…?

Fowler has also seen a regression this year in what was considered a strength for him and where he was often considered one of the best in the league. As mentioned earlier, Cam has been one of the best at controlled zone exits over the last three NHL seasons. As you can see above he has been in the upper echelon of the league in that category for the last two seasons. This year, however, we have seen a significant regression in Fowler’s ability to cleanly exit his own zone. His zone entries with possession have also taken a hit. You could argue that this is because Anaheim as a team has been awful this season. However, Hampus Lindholm is among the Top 3 in his position in possession exits/60 and Brandon Montour is Top 5 in possession entries/60. If what you’re paying him for is to generate offense therein lies the problem this season. There simply hasn’t been enough of it, or any at all. In the 9 games since returning he’s only taken 10 shots at all strengths and has 0 points in over 210 minutes. It’s a small sample size, considering he had 10 points in 19 games before being sidelined. However, it’s worrying nonetheless.

More from Pucks of a Feather

By no means am I saying Cam Fowler is a bad player and that the Ducks would be better off without him. However, with a new contract kicking in fans have questioned the long term viability of Cam Fowler being one of the Anaheim Ducks best defensemen. It’s never a good idea to sell low, but could the Ducks trade him? Should they put him back with Brandon Montour? Or will they do nothing and remain patient?

Some fans have already voiced their opinions.

I'm writing an article on Cam Fowler and I'm curious about people's opinions on him now.

Let us know your thoughts in the comments!

Next: Anaheim Ducks: Spotted! Corey Perry on the Ice at Practice
Top Stories